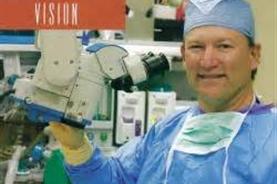 Dr. Anthony F. Novak is Board Certified by the American Board of Ophthalmology, with over 25 years

He graduated from Hamline University with a Bachelor's Degree in 1980 with honors. He attended Medical School at the University of Minnesota and graduated Alpha Omega Alpha in the top of his class.

After completing a year of training at Regions Hospital in Family Practice, he completed his specialty training at the University of Minnesota Department of Ophthalmology. He served on Mercy Ships performing surgery for the third world nation of Guinea West Africa.

In 1989 Dr. Anthony Novak joined Red Wing Clinic in Minnesota. After 17 years of outstanding service, he chose to start his own practice, the River Falls Eye Surgery and Laser Center in 2006.

I graduated Salutatorian of my high school class in 1976 in Eveleth Minnesota and received an Academic Presidential Scholarship at Hamline University.  At Hamline, I received top honors in both Biology and Chemistry for my freshman year (one of the only students to receive both awards) and graduated with honors with a BA degree.  I spent a year doing research for Honeywell on their Very High Speed Integrated Circuitry program ( the cutting edge of semiconductor research at the time). I attended Medical School at the University of Minnesota and graduated Alpha Omega Alpha at the top 10% of my class.  I spent one year in the family practice residency program at Regions Hospital in St Paul MN after which I completed residency training at the University of Minnesota Department of Ophthalmology.  I also did research on corneal transplant preservation media for Richard Lindstrom MD and published an article on this research.  During residency I also did research on Cytomegalovirus infections associated with AIDS and published an article with Herbert Cantrill MD.  I received the Harry Plotke MD award for outstanding qualities befitting a physician and received the honor of the Richard T Olson MD award for teaching other resident physicians about eye care.

The Eye Surgery and Laser Center has the most current diagnostic equipment for monitoring glaucoma: an optic nerve scanning laser polarimeter which is the standard of care for glaucoma monitoring.

The Center has the "newest" clinically proven technology for diagnosing and managing Macular Degeneration: Digital Fluorescein Angiography and an Optical Coherence Tomographer (OCT) which scans the macula for signs of "wet" Macular Degeneration, swelling if the retina from diabetes and inflammation.

My focus is to provide the most "cutting edge" diagnostic and therapeutic eye care and continue to utilize specialty consultations for complex cases.  I do not sell eyeglasses or contacts at the Center.